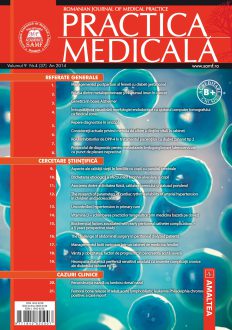 Read the Recommendations for the Conduct, Reporting, Editing, and Publication of Scholarly work in Medical Journals.

The published medical research literature is a global public good. Medical journal editors have a social responsibility to promote global health by publishing, whenever possible, research that furthers health worldwide.

Currently both the definition of some measures with a strategic significance concerning the physiological state of the human body and some ways of mortality prevention caused by cardiovascular diseases in children and adolescents are considered of a great importance, constituting morbidity and mortality major problem in population worldwide. In order to solve these tasks different specialists in cardiology have initiated for decades researches in etiopathogenesis and pathophysiology of chronic heart failure.

In recent years more frequently the fact that heart failure is a complex disorder with progressive evolution, characterized by structure and cardiac function damage is emphasized, the endogenous neurohormonal activation plays a significant role. The primary role in triggering heart failure in children refers to chronic myocardial dysfunctions which constantly maintains morbidity at a high incidence due to cardiovascular diseases.

Material and methods. A number of 137 children were included in the study, from these 52 patients having arterial complicated hypertension and chronic heart failure were selected, who showed signs of chronic dysfunctions of the myocardium according to the investigational data, forming the core group, and 85 healthy children without any signs of heart failure who formed the control group. On the basis of instrumental exploration the diagnosis confirmation of chronic myocardial dysfunctions was established exerting the following optional methods: (a) ECG performed at Cardman apparatus Fx-3264 (Japan); (b) EchoCG Doppler; (c) x-ray test of the thoracic cavity’s organs, ECG computerized monitoring at the outpatient department according to Holter’s method, as well as TA computerized monitoring at the outpatient department in 24 hours.

The dynamic group analysis’ result of the heart rate variability in patients with arterial hypertension after a thorough check up of the main ECG events, the time parameters have been determined automatically as: SDNN, SDNNi, SDANN, r-MSSD, pNN50 that noted significantly increased values compared with the control group at inclusion in the study phase and the spectral ones that also showed conclusive increases versus the control group. Dynamic evaluation of these parameters showed irregular oscillations, the values being significantly increased compared with the control group, confirming the result of metabolic disturbances that occur after myocardial hypoxia processes being the cause of changes in cardiac electrophysiology in chronic myocardial dysfunctions.

Conclusions. 1. Due to the results of this study we established that in the followed up children and adolescents with arterial hypertension changes in cardiac electrophysiology occurred that were defined both by the occurrence of heart rhythm disorders such as sinus tachycardia in 63.5% of cases, sinus bradycardia in 38% of cases, changes in QRS morphology in 88,.5% of cases, supraventricular extrasystoles in 11.5% of cases, ventricular extrasystole in 11.5% of cases, abnormal remodelling processes in the left ventricle in 94.2% of cases, hypertrophy signs of left ventricular myocardium in 61.5% of cases. 2. In the patients examined in this study significant changes in heart rate variability parameters were determined, which denote a disorder of regulatory systems in cardiac electrophysiology and significantly influences the clinical condition of patients and the development of chronic myocardium dysfunctions. The heart rate variability parameters modifications’ specifics in chronic heart failure secondary to arterial hypertension influences the prognosis of patients with an increased risk of sudden death.

To receive the Ro Journal of Medical Practice click here: 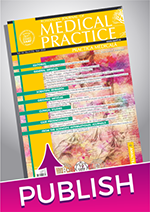 To receive the Ro Journal of Medical Practice click here:

The intended audience of the site content is professionals from the medical and pharmaceutical community.
This site does not collect any personal data nor does it use cookies that might obtain such data from your browser. [ info ]
Agree